Yep, that’s my hometown of Tuscaloosa, Alabama in the video and yes, that’s a category F4 tornado barreling through it.

Just two weeks before we were hit by a smaller one that left a path of downed trees and destroyed homes only on a much smaller scale.  That one I unknowingly drove right under about 30 seconds after it’d damaged a local business rooftop.  (For those that don’t know much about tornadoes, they are not always on the ground making mulch out of your neighborhood pines.  They can sometimes pass without touching down at all, and they also occasionally like to play a little hopscotch where they go down and back up.  Fortunately, I hit it on the upswing.  It damaged the one business, and then it knocked some trees into homes on the other side of me.  I was very fortunate.)

Driving under that tornado – though I didn’t realize at the time that’s what I was doing – I was scared.  The clouds were very dark and dangerous, the rain wasn’t falling hard but the direction of it didn’t make sense…  Looking back, I should’ve known.  I remember praying, ‘Hey, God.  I’m kind of scared right now.  These clouds are really freaking me out.’ Because I’m calm, cool, and collected like that.

Last Wednesday though was a different story altogether.  The meteorologists had been predicting this bad weather for a week.  Early that morning as I’d gotten ready for work I let my dog out and noticed the trees were going crazy in my back yard with all the wind.  It was lightning so frequently it literally almost looked like it was daylight out.  I went back inside and within a few minutes there was a torrential downpour where there hadn’t been a drop earlier.  I don’t know jack about weather, but I remember then thinking this was going to get ugly.

That was our first tornado of the day.  It crossed over much of Tuscaloosa in the air so there wasn’t much damage here, though later it did some damage in other cities.

I go on into work and the majority of the day it clears up and the sun is shining.  There were tornadoes in other areas of the state but they were missing Tuscaloosa.  There was one really bad one that hit Cullman, Alabama and I’d watched the weather feed online for that storm.  It basically flattened the entire city.

Our weather had been predicted to start between 12 – 2 PM so as I’m driving home at 3:30 or 4 that afternoon with just a little overcast sky I’m listening to the meteorologist on my radio talking about three storms in other parts of the state and pretty confident we’d seen the worst of our weather.  Heh.

By the time I got home and ate a little snack (maybe 30 minutes later) the sky had darkened and I had our local meteorologist zen master, James Spann on my television.  A storm was headed our way.

James Spann….when bad weather is predicted around here he’s almost as revered as Paul ‘Bear’ Bryant himself.  And that’s saying something because these Crimson Tide fans take their Bear very seriously.  If you’re ever present during a storm in this area, you will understand why.  I don’t know how he can possibly be so knowledgeable but he knows every small one-traffic light town in this state, every road, every landmark….so when he’s tracking that storm you know exactly where it is because he just told you it’s over on Highway so-and-so next to the First Baptist Church or Chuck’s Package Store or that giant oak with the crooked limb.

Not only that but as he’s describing the storm he will say things like, ‘It looks like it’s on the same path as the tornado from March 26, 1972.  That storm hit right along such-and-such cities.’  Or, ‘This storm is a little bigger than the storm back on February 14, 1988.’  I mean, the man knows his stuff.

We have a running joke about Mr. Spann and his weather tracking.  The state of his undress determines the severity of the storm.  Suit jacket on and buttoned up, don’t even blink an eye.  Jacket unbuttoned, you may get a little something.  If the jacket’s off and suspenders showing, take note.  When the sleeves are rolled up, all Hell’s about to break loose.

Wednesday was a suspenders day, with the sleeves unbuttoned.  But I’m watching the sky get darker and I’m watching James Spann on my TV.  He’s talking about this storm headed to Tuscaloosa and he’s telling us to get to our safe places.  He’s telling us this one is as bad or worse as the one that hit Cullman earlier.  And then my power goes out.

My cell phone starts ringing with a friend calling because she just heard on the radio the storm is headed for me.  So I run through my house grabbing a few pillows.  I start to shut off my hallway because it’s the center of my house with no windows.  I put my dog in there.  Then I’m running around my house to each window (exactly like they tell you not to do) trying to spot the storm.

I finally see it out my back door.  The next 5 minutes were probably the longest of my life.  I flit from one room to another following this storm.  I have two friends calling my cell phone checking on me but the phone keeps cutting out.  I have no TV and no radio so I’m watching this dark cloud now to the left of me and I don’t know where it’s headed.  Then it’s around the front of my house and I’m watching it make its way across the landscape.  What I see is a very dark line of cloud with lighter sky between that and the tree line.  Right in the middle I see the top of the funnel, but I never see the whole thing.  The wind picks up and I hear that roar of wind they talk about.

I’m praying and I’m fighting tears and I’m out of breath because I really just want to curl up and have a good panic attack.  As quickly it began, I realize the storm is past me and I’m standing at my front door peeking out the window feeling like I just dropped a 50 lb. bag off my shoulders.

I am one of the few fortunate ones.  I had no damage whatsoever outside of a few small limbs and a power outage for 5 days or so.  My only inconvenience was to stay at a friend’s house instead of sleeping in my own bed, and some ruined groceries in my refrigerator.

The storm missed me by about 3/4 of a mile.  Where it began though, left flattened buildings and several deaths in a housing complex.  When I say I was fortunate, I am not joking.  It left a path of destruction 80 miles long across my state.  It is said to be the deadliest single day for tornadoes since March 18, 1925.  We had 65 fatalities in Tuscaloosa and surrounding areas alone.

My hometown, my Tuscaloosa, will probably never be the same.  The next day I drove to work and it’s shocking to your senses when you drive a route you take everyday and it looks just the same and for a split second you think, ‘It’s ok’, but then you round a curve and there’s a path of chaos where giant trees that once stood strong and tall are now blocking the road or laying on top of that cute little yellow house you always admired when you passed.  Or maybe that cute little yellow house you admired is gone altogether now.

The power was out at work so I spent the day instead with co-workers.  As they showed up here and there I would listen to each of their accounts of the storm.  Some talked about the destruction they saw as they drove to work, some talked of family members, some of damage to their homes, and some of the home they once had that’s now just a foundation.  We had no casualties from where I worked but everyone had a story.  Everyone was affected.

It’s been a hard week in Tuscaloosa.  A hard week but also a very powerful, hope inspiring one.  The downed trees and crushed homes are still there but beside them you now see the neighbors working together in their lawns on repairs while smiling or laughing with each other.  You listen to the radio station that has given up its music to now be a 24-hour news/update center filled with callers offering what services they can to neighbors in need.  Your Facebook feed is filled with friends posting updates on donation and volunteer needs.  You see corner after corner of donation sites or grills set up to feed the hundreds of volunteers.

You drive that same route to work each morning and you see the destruction that makes your heart sink but you round yet another curve and right on the side of the road beside a tree trunk is a small makeshift pole with an American flag flying proudly in the breeze.  You tear up a little because you realize it’s been a bad week in Tuscaloosa, but we are strong. We are determined. We will persevere. 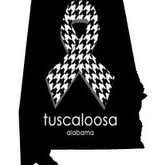 Here are a few pictures I snapped on my way to work the next morning.  They’re grainy but that’s because I drop every digital camera I’ve ever owned. 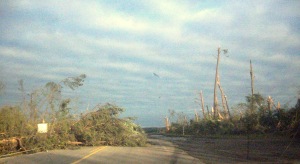 Before the storm you couldn’t see sky on either side of the road because of the trees. 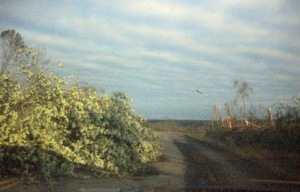 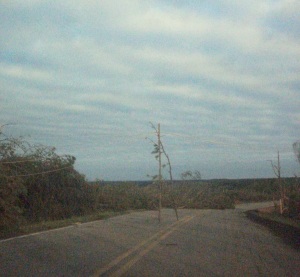 It’s hard to see, but this is a prop for the downed utility lines.
Some of our craftier employees, no doubt. 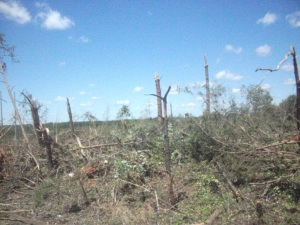 Again, this was blanketed with trees.  Trees that had leaves….and limbs. 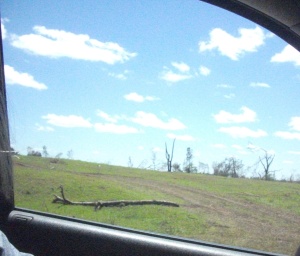 There was once a house in the left corner there. 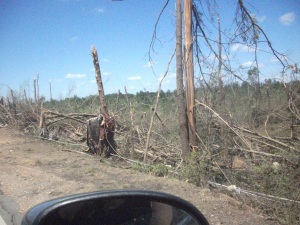 Across the street from the now empty lot, you see their mattress in a tree.